Skip to navigation
Build Your Future Contact Us Today 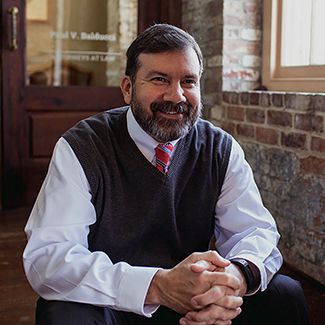 Paul V. Balducci is an attorney in Augusta, Georgia, who specializes in immigration and naturalization law. Paul has been in practice for over 30 years and has earned the trust and respect of clients and colleagues in his field.

Specializing in Immigration and Naturalization Law

Since opening his own firm in 1995, Mr. Balducci’s practice has focused on international and immigration law, including family and employment-based immigration, citizenship, and deportation cases. His law practice also includes the representation of workers injured on the job, especially for workers without employment authorization.

Commitment to the Practice of Law

Paul Balducci was admitted to the Georgia Bar in 1992. Because he is fluent in both English and Spanish, Mr. Balducci is able to serve a wide range of clients, including those who might otherwise be unable to communicate their needs to a legal professional. His unique life experience, skills, and legal expertise make Mr. Balducci an excellent advocate for anyone needing help with an immigration issue.

Whether you need help with a visa petition or removal defense representation, I'm ready to help.

Commitment to the Community

Mr. Balducci is proud to serve the Augusta, Georgia, community in both a professional and personal capacity. He actively works to keep community members informed on the changing face of immigration policy in the United States, and has appeared on local television programs to discuss immigration in both English and Spanish. His editorials on immigration issues are featured in the local Hispanic publication, Hola Augusta, and he has volunteered his time to meet with local students in the classroom to talk about immigration issues and the United States Citizenship process.

Commitment to the Importance of Family

A strong understanding of the importance of keeping families together is at the heart of Mr. Balducci’s perspective on immigration and is what makes him such an effective attorney. Paul’s mother was born and raised in Mexico, D.F. and immigrated to the United States as a newlywed. His belief that families deserve every opportunity to stay together strengthens his practice of law, and he works tirelessly to both help bring clients’ relatives into the United States and prevent them from being removed. As a son, husband, and father of six, Mr. Balducci understands that there is no such thing as a “small immigration matter” and that immigration law is not about petitions and applications, but about husbands, wives, sons, and daughters. This is the reason so many people have confidently trusted him to handle their immigration cases over the years.